Which Is Better: Manual or Electric Toothbrushes? Depends on How You Use Them

It’s one of the perpetual questions in dentistry: are electric toothbrushes better? Since their introduction in the 1950s and their widespread marketing in the 1960s, manufacturers of electric toothbrushes have put forward many claims about the efficacy of their devices. They’ve even developed scientific tests that show how much better they can clean.

But when we look at the real-world performance, the evidence doesn’t support the superiority of one or the other. Now a new study looks at the effectiveness of these devices in a population that might get special benefit from electric toothbrushes: nursing home residents. But even in this population, the study suggests that it’s basic oral hygiene instruction, not the type of toothbrush, that makes the difference in oral health. 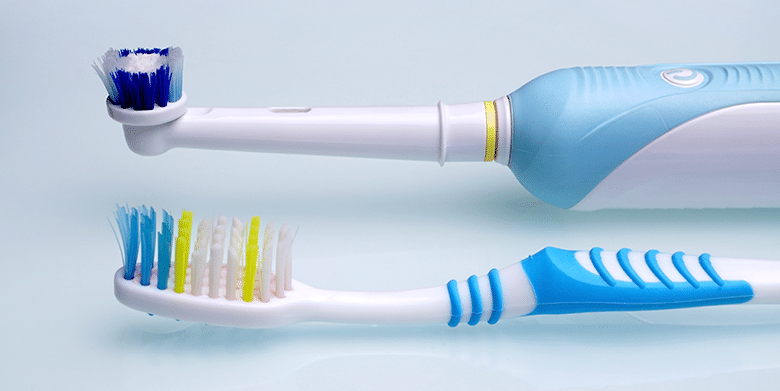 When it comes to oral health, nursing home residents are at a greater risk for oral health problems than other people. They are more likely to have restorations that can collect plaque, especially partial dentures. They are also more likely to have dry mouth, caused either by aging, illness, or medications. And they likely have physical dexterity challenges that can make it hard for them to properly clean their teeth and gums.

And this is a population for whom oral health has literally become an issue of life and death. Good oral health can help fend off serious health problems like dementia, heart disease, and more. Seniors with good oral health live years longer than those with poor oral health.

So this is a great place to test this question: will nursing home residents benefit more from using a manual toothbrush or an electric one?

A Simple and Time-Efficient Intervention

To answer this question, researchers selected 204 residents at nine nursing homes. They were randomly assigned to receive either a manual or electric toothbrush, a fluoride toothpaste, as well as oral hygiene instructions on the proper techniques for brushing. After following the groups for two months, they found that both groups saw significant improvement in their oral health, although there was no difference between the two groups.

Once the original study ended, 180 of the participants were offered their choice of a new toothbrush (they could pick either manual or electric at this point, no matter which group they were in at first), then they were left alone for a year.

After a year, they checked on the residents and found that their oral hygiene was even more improved than it had been at two months. But there was no significant difference between the two groups.

It’s Not the Toothbrush: You Make the Difference

This study shows again that although an electric toothbrush might be better for some people, overall, it’s the person using the toothbrush that makes the most difference in terms of good oral health.

If you’re looking to renew your commitment to good oral health with regular dental visits, including a refresher on toothbrushing techniques, we can help. We also offer high quality reconstructive dentistry, gum disease treatments such as Perio Protect, and other treatments to preserve and restore your oral health.