According to new archaeological evidence, researchers believe that 86 teeth found trapped under a drain in the Roman Forum are evidence that a sophisticated dental practice was located there in ancient times.

A Discovery in Need of Explanation 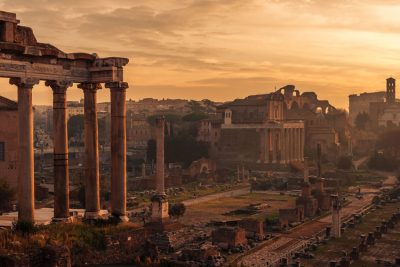 In 1987, workers discovered 86 teeth trapped in an ancient Roman drain in the Roman Forum. The drain led from a small shop nestled up against the Temple of Castor and Pollux, which is located between the Coliseum and the Capitoline Hill. It was unknown why there would be so many teeth found in this location, but now archaeologists believe they have enough evidence to prove that these teeth were extracted by a dentist with great skill.

The first clue that these teeth were purposefully extracted is that every single tooth had significant decay in it. The large cavities in the teeth would have been quite painful for the owners of the teeth. Second, researchers found evidence in the shop that was the source of the drain suggesting that it might have a medical purpose. For example, pain relieving ointments were found there. Finally, the marks on the teeth reflect extraction techniques described in Roman medical manuals of the day.

Roman extraction techniques involved gripping the teeth with a pair of pliers and work it free, probably tearing the periodontal ligaments. If necessary, the gums and bones were cut to help the tooth come out.

A High Risk Population with Little Prevention and No Cure

Despite suggestions that the Romans might have had better periodontal health than modern people, the truth is that Romans had high risk for tooth decay and gum disease. With a grain-based diet that also included lots of sweets, oral bacteria thrived in the mouth of Romans. There were few preventive treatments, with most Romans using a toothpaste that was derived from urine.

And if Romans started to develop tooth decay, there were no fillings, dental crowns. The only treatment was the extraction of the tooth, with only wine for anesthesia, and no dental implants to replace them.

Today, the only tooth extraction most people will need before they reach the age of 65 is wisdom tooth extraction. This is because our teeth are so healthy that we don’t need wisdom teeth to replace worn out or lost teeth. We also don’t have room in our jaws for wisdom teeth because we don’t chew as many coarse, gritty foods that stimulate jawbone growth.

Modern extractions are also a lot more comfortable. We use anesthesia so you are unlikely to experience much discomfort during the procedure, and painkillers after the procedure help prevent discomfort then, too.

And we don’t just throw your teeth down the drain, either.

If you are looking for wisdom tooth extraction, please call (614) 848-5001 for an appointment with a Columbus, Ohio dentist today.