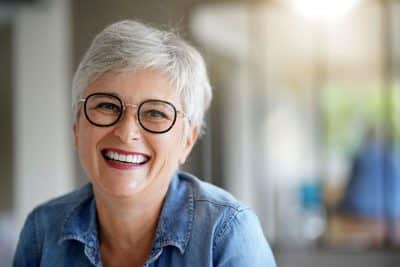 We want to share with you the story of this case, a patient whose full-mouth reconstruction produced functional and cosmetic changes to improve her bite and expand her airway. This helped her feel better, so she felt more desire to smile, and improved her smile so she’d be confident in her smile, too.

What Is Full Mouth Reconstruction?

The goal is a healthy, functional bite and a beautiful smile.

When Shelly (name changed to retain anonymity) came to us, she had a number of issues with her bite. She had TMJ symptoms such as jaw pain and headaches. Visually, her collapsed bite made her face look more squat and square, which made her look older and more overweight than she actually was. Visually, her face had sunken, bringing her nose closer to her chin.

What people couldn’t see was another major impact of her collapsed bite. Because of the size, position, and fit of her teeth, Shelly’s airway was very narrow. This made it harder for her to breathe. The result was a general sense of fatigue and low energy.

Shelly decided she wanted a change and came to us with these problems because she knew that Dr. Mike Firouzian is one of the few dentists in Columbus, OH, who deals with these types of issues.

To determine the source of Shelly’s symptoms, Dr. Mike ran a full TMJ diagnostic. This includes an assessment of jaw function and jaw tension. We do this with the K7 system that measures muscle tension, tracks jaw movement, and assesses jaw sounds.  Detailed imaging of her airway with cone beam computed tomography (CBCT) revealed how her collapsed jaw had narrowed her airway. An unattended sleep study also helps to screen for underlying Upper Airway Resistance and or Obstructive Sleep Apnea.

Looking at these results, Dr. Mike designed an oral appliance (orthotic) to restore Shelly’s bite to a healthy position. Shelly wore the orthotic until her jaw adjusted to the new position.

To integrate the new bite position in Shelly’s bite, Dr. Mike built up some of her damaged/worn teeth with dental crowns and upper veneers. Shelly also needed five dental implants to replace teeth that were unhealthy or had been lost previously (which had contributed to her dental collapse).

Loving Her New Energy and Her New Smile

Shelly is delighted with the results of her full mouth reconstruction. She is happy to have a bite that lets her chew comfortably and effectively. In addition, she loves the new energy she feels now that she can breathe more easily.

Plus, she loves the way her new bite has had a rejuvenating and slimming effect on her facial appearance. She doesn’t just feel younger and fitter–she looks it, too.

Look and Feel Healthier with Full Mouth Reconstruction in Columbus

Are you experiencing TMJ symptoms like ear and jaw noises, jaw pain, headaches, or more? Do you find you have low energy, possibly even chronic fatigue coupled with loud breathing and/or snoring? Have you been identified with Fibromyalgia? Full mouth reconstruction in Columbus can fix these problems and give you a beautiful smile, too.

To learn how full mouth reconstruction can help you, please call (614) 848-5001 or use our online form today to request an appointment at Firouzian Dentistry in Columbus’ Crossroads neighborhood.