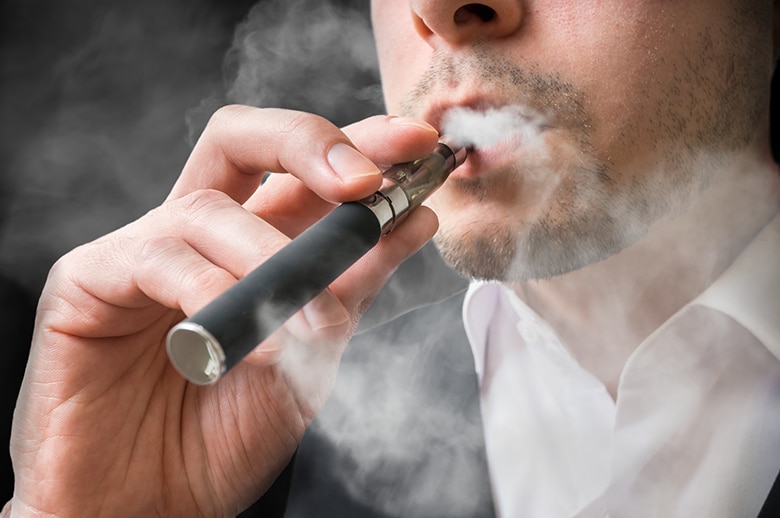 This team of researchers was looking at how e-cigarettes influenced the distribution and type of oral bacteria found in the mouth, what they describe as the oral microbiome.

They took plaque samples from below the gumlines of 100 healthy individuals in five groups:

They then analyzed the genetic makeup of the samples to determine the distribution of oral bacteria in each sample. They found that the oral bacteria in e-cig users were genetically different from those found in nonsmokers and regular cigarette smokers. Some of these genes coded for characteristics that would make the bacteria harder to control, such as antibiotic resistance.

Is the Harm Worse?

Researchers noted that their study showed that e-cigarettes should not be considered safer for oral health than tobacco cigarettes. They said that the impact on gum disease “may be similar to or greater than smoking.”

We don’t know if the harm is actually greater at this point, but the distinct genetic profile of oral bacteria in e-cig users and the presence of virulence factors that make them harder to control suggests e-cigs could be worse. And the perception that e-cigs are safer could also be harmful, causing more people to adopt e-cigs after decades of decline in the usage of cigarettes.

Future studies will be needed to determine the actual risk profile of e-cigs.

Undoing the Damage of Cigarettes and E-Cigs

Smoking, using smokeless tobacco, and using e-cigarettes can all cause serious damage to your teeth. By modifying your oral biome, they can increase your risk of cavities, gum disease, and tooth loss.

Gum disease treatment can sometimes save your teeth, but if teeth are lost, dental implants may be recommended. But there’s a catch: tobacco (and possibly e-cigs) is as bad for your dental implants as for your teeth. If you want to replace your lost teeth with dental implants, you should quit tobacco or e-cig use, at least temporarily.

If you want to learn more about reducing or reversing the harm that smoking or e-cigs have caused on your oral health in Columbus, OH, please call (614) 848-5001 today for an appointment with cosmetic dentist Dr. Mike Firouzian.