Got a Toothache? …See the Blacksmith!

Before modern dental science existed in the USA, people still had problems with their teeth. Oftentimes, though, there wasn’t anything approaching an actual dentist nearby. In the early 1800s, there wasn’t even a specific dental profession, and licensing hadn’t been invented yet. 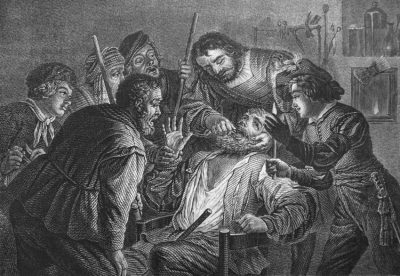 So, what did people do about their teeth when they had a problem? For starters, many people only sought help if they had a toothache. Extractions were also really common. Because dentists didn’t really exist yet, the job fell to those who had the appropriate tools – blacksmiths and barbers.

It wasn’t until the 17th century that dentistry received official recognition. Pierre Fauchard, a French physician known as the Father of Modern Dentistry was behind many of the dental procedures still used today.

Before dentistry was recognized, many of the dentists during this time were actually barbers who were partially trained about dental procedures. They used instruments known as “dental pelicans” or “dental keys” to perform procedures or extract teeth. The barbers focused primarily on extracting infected teeth for pain purposes, not preventive procedures. Some did know how to fill cavities and create false teeth though. In addition to their dentistry business, they were also experts at applying leeches. Barber surgeons were around until 1820 until dentists took over.

In addition to barbers, blacksmiths also worked as dentists on the side – mostly because they already had the sharp tools needed. Some extractions were so intense and done incorrectly that they would break the jaws of patients.

Why Dentists Took Over

Of course, as time went on and the dental profession truly began, actual dentists became irritated at barber surgeons and others who continued to practice without serious training. Thanks to their input, we now have full licensing requirements, meaning you can’t go to your village blacksmith or medieval barber to get your tooth pulled. We think this was a good idea.

Unfortunately, even after barber dentists and blacksmith dentists were gone, people were still performing dentistry without a license. In the early 1900s, New York was home to over 5000 unlicensed dentists. Many patients died of infections or abscesses from the lack of sanitation.

Today, in India, street dentistry is very common and usually, a family learned trade although it is illegal. Many unlicensed dentists work on the streets and charge as little as 125 rupees for a dental bridge which is normally about 10,000 rupees with a licensed dentist. Seeing illegal street dentists might save you money but also comes with a huge risk.

Err on the side of caution and only visit a licensed and credible dentist today. Dr. Firouzian has over 20 years of experience and over 1700 hours of continuing education. You don’t have to worry about your results, sanitization, or health when you visit our dental office. We can assure you that you’re in good hands and visiting a licensed dentist is completely safe!

If you’re looking for a top-notch dentist in Columbus, Ohio, contact Firouzian Dentistry today to schedule an appointment by calling (614) 848-5001.