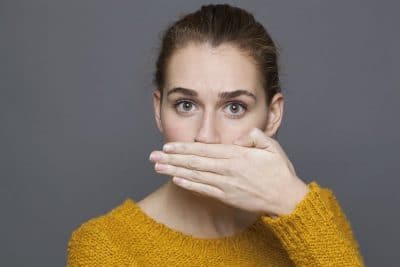 All of us have suffered from bad breath at one time or another. But it is estimated that forty million Americans suffer from bad breath that never goes away. This can make social situations, from first introductions to business transactions to intimate moments uncomfortable.

If you are unhappy with bad breath, there are many potential causes—and almost all of them can be treated by a dentist. For bad breath treatment in Columbus, please contact Firouzian Dentistry today.

The medical term for chronic bad breath is halitosis. This term was coined in 1921 by George Lambert, the son of Listerine inventor Jordan Wheat lambert. Looking for a marketing angle to expand sales of Listerine, which had been sold over-the-counter since 1914, he invented the term. The term combines the Latin for “breath,” “halitus” with the medical ending “osis,” so it’s literally “breath-itis.”

However, contrary to what some people might argue, Listerine didn’t invent bad breath, nor were they the first to consider it a medical condition. We believe that honor goes to the Egyptians, noted dental pioneers. In the Ebers Papyrus, dating from before 1500 BC, we find the first recorded recipe for curing bad breath. Since then, numerous medical texts discuss the condition and possible solutions.

Surprisingly, most people with halitosis are not aware of their problem breath.

Some people think that bad breath is a result of what’s going on in our stomachs. But that’s not usually the case. If you have indigestion, you might burp up foul-smelling gas. Most of the time, though, the odor of halitosis is generated by bacteria that thrive in the mouth under the gums, and in the nooks and crannies on the teeth and the surface of the tongue. They are anaerobic bacteria, which “breathe” sulfur instead of oxygen. Left untreated these bacteria create volatile sulfur compounds that have a characteristic “rotten egg” smell. Most people would probably like their breath to be more pleasant than that.

Bacteria colonizing around your teeth causing gum disease can sometimes give off smelly sulfur compounds.  These bacteria live in the space between your teeth and gums. They attack your gums to enlarge the space and make more room for themselves to live in. As the spaces get deeper, it becomes a perfect dwelling place for anaerobic bacteria. As they thrive, you end up with chronic bad breath.

As the pocket gets larger, bacteria attack your bones as well as gums. If left untreated, gum disease can lead to tooth loss. Gum disease can also cause your immune system to kick into overdrive, leading to chronic inflammation and autoimmune disorders. Gum disease has been associated with heart disease, diabetes, kidney damage, and, potentially, cancer. At Firouzian Dentistry, we offer PerioProtect, an advanced gum disease treatment that can help people treat serious gum disease without surgery.

Gum disease symptoms to watch for include:

If you see these symptoms, contact your dentist right away.

Sometimes bad breath can be a sign that you have an infected tooth, also called an abscessed tooth. It occurs when cavities become deep enough to reach the interior of the tooth, where the living pulp is located. Inside the tooth is another great environment for anaerobic bacteria, which is why they can cause bad breath.

Other infected tooth symptoms to watch for include:

If you see these symptoms, contact your dentist right away.

People with sleep apnea often breathe through their mouth in their sleep. This dries out the mouth, encouraging the growth of odor-causing bacteria.

Other sleep apnea symptoms to watch for include:

If you see these symptoms, contact your doctor or dentist right away.

Talk to a Dentist about Chronic Bad Breath

Because of these potential causes, if you experience persistent bad breath, it’s important to see your dentist. Note other warning signs you have so you can help your dentist pinpoint the cause.